Home » Blog » Behind the Scenes Band Portrait with 'Kasama' on a Windy Scottish Hillside, by Photographer Kim Ayres - 5 min read

Behind the Scenes Band Portrait with 'Kasama' on a Windy Scottish Hillside, by Photographer Kim Ayres

Kasama are a young, energetic local band with great potential.

While the songs all sound great, they needed some strong promotional images to promote their EP, "Noisy Neighbours".

Their initial idea was to have a photo of them next to the radio masts out at Skyreburn (SW Scotland), but when they had tried being photographed standing directly underneath the towers, it hadn't worked – primarily because of trying to fit it all into one image – either the tops of towers were cut off, or the band looked too small next to them.

At a bit of a loss what to do next, they talked to their producer, Marcus, and Marcus called me to ask if I could help out.

I met up with a couple of members of the band for coffee, and realised the best approach would be to shoot further away from the radio masts, so they appeared on the top of the hill behind them, rather than directly above them. We set up a Facebook group chat to get everyone involved in honing the concept and working out what props we would need.

Before long, the idea of a semi-domestic scene – based around a coffee table and sofa – but out in the hills, started taking shape. Each person would be doing something different – playing the guitar, switching on the radio, eating a bag of chips etc.

They sent me a thumbnail sketch. 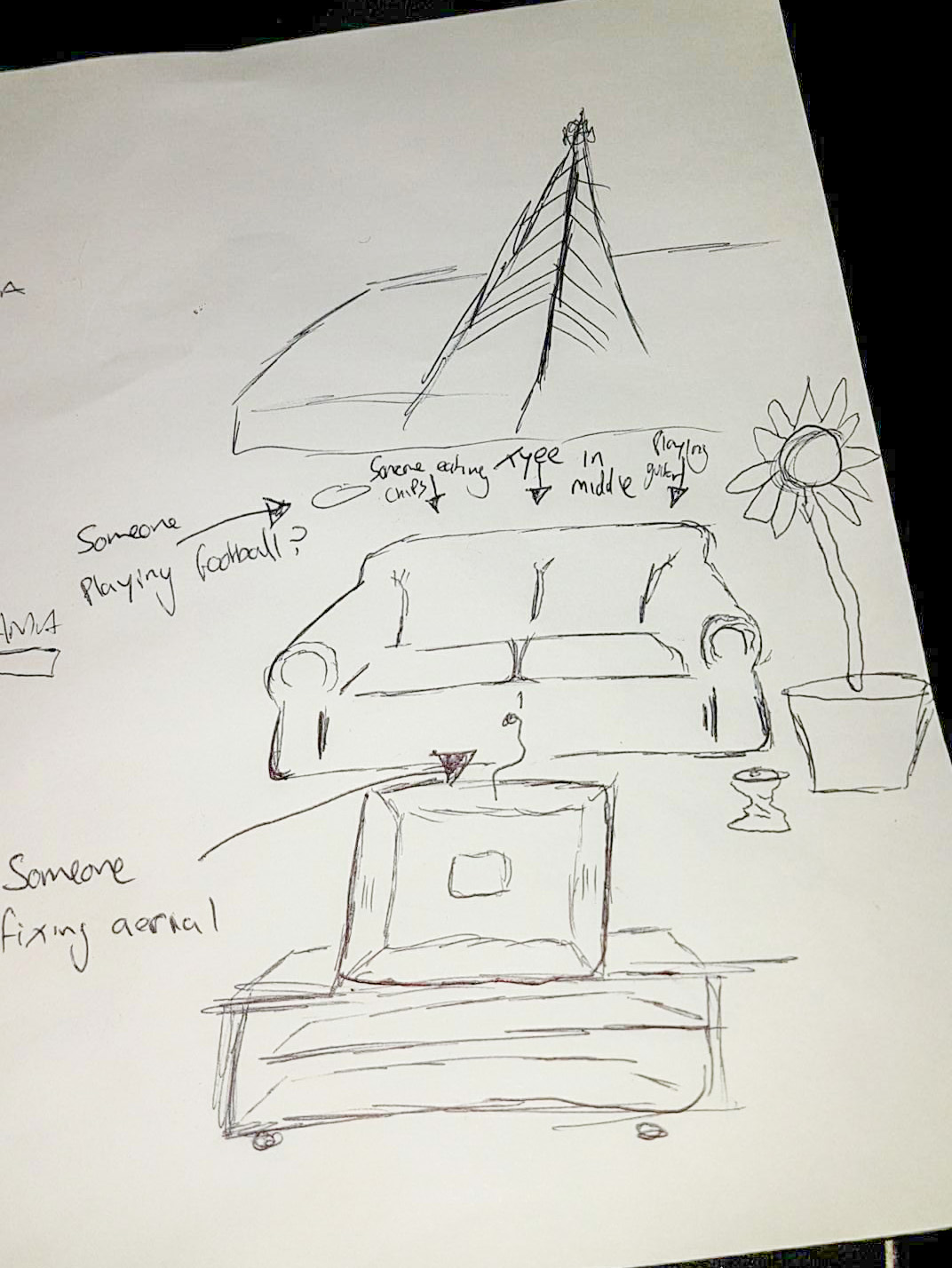 When we arrived, it was blowing a gale and one of the original ideas of someone playing football had to be discarded.

It was also a dull, overcast day with very flat light, so I had to set up a couple of off-camera flashes to add a bit of depth to it. 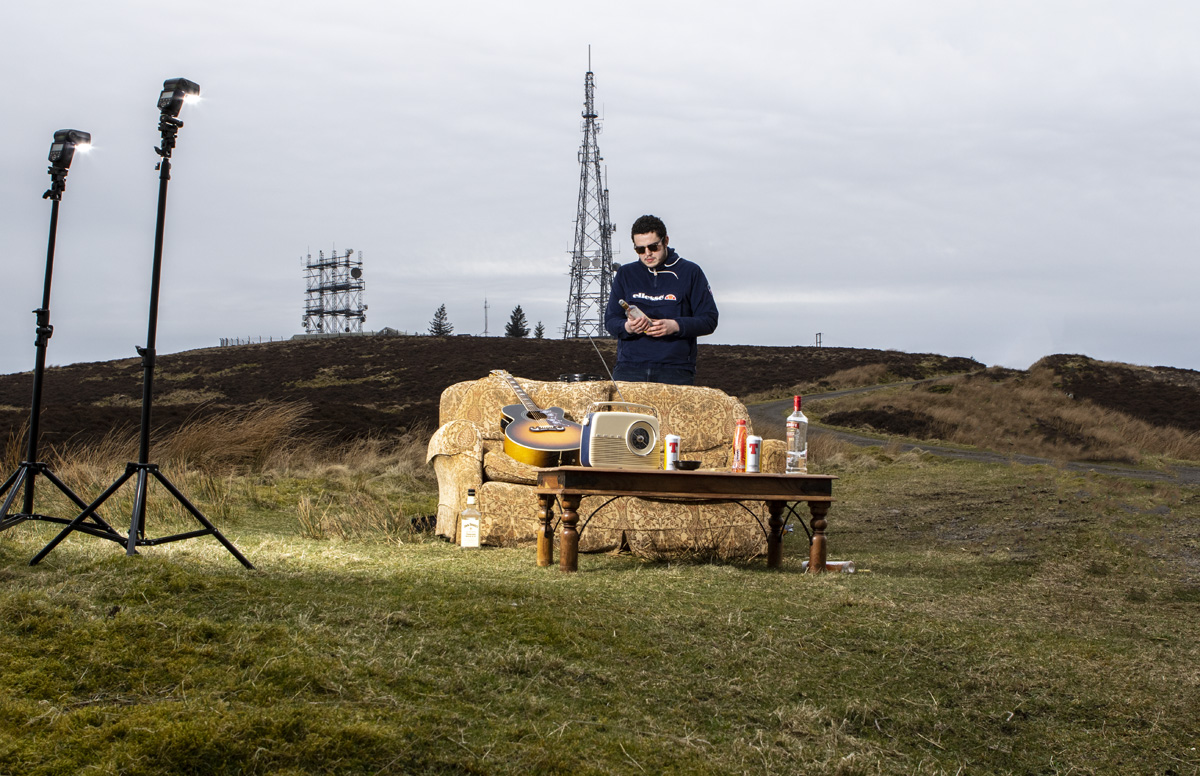 Despite frozen hands, ears and noses, the guys threw themselves enthusiastically into the shoot and in the end we got the first image we were after. 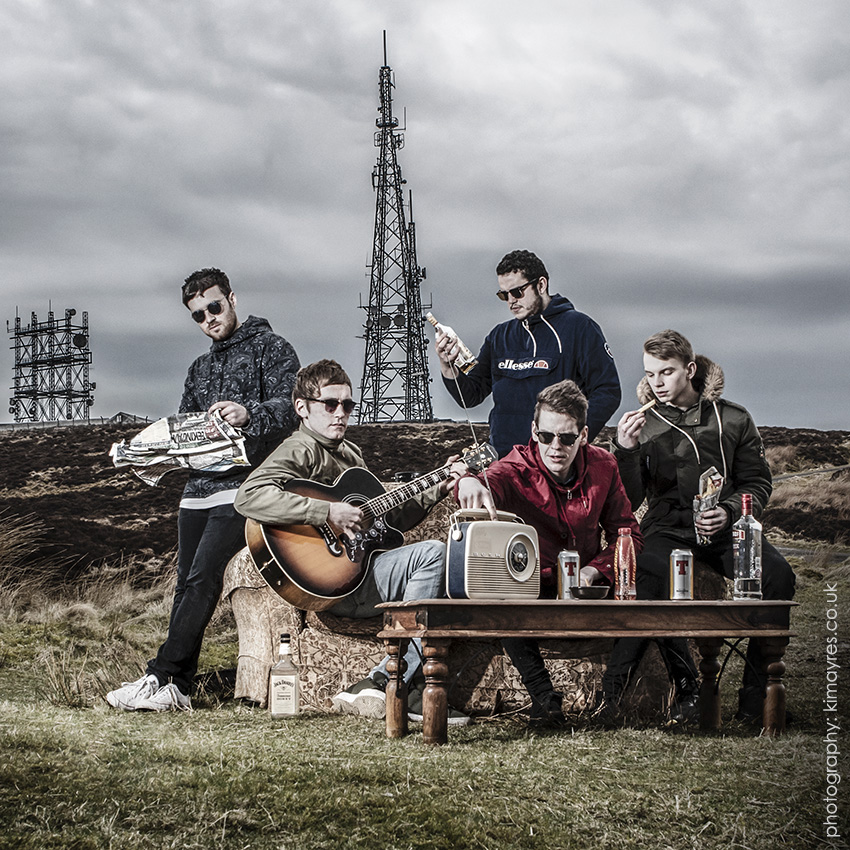 When the EP was released the local papers did a feature on them and used this photo to headline their out-and-about section, so it was good to see it being used. 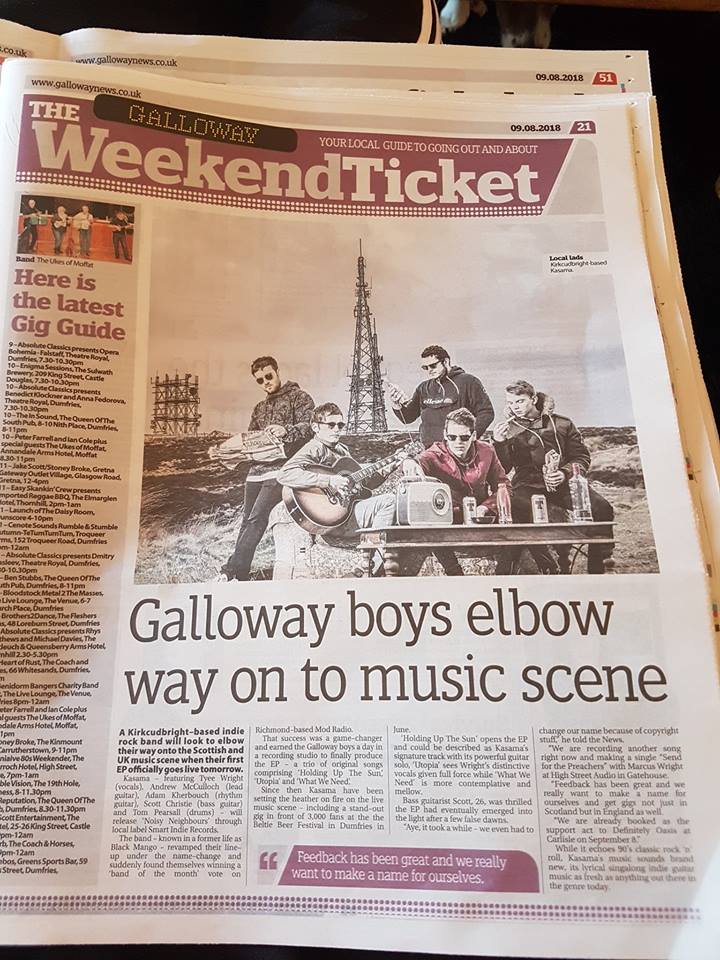 With that in the bag, we decided to go for a really close up shot using the wide-angle lens. It didn't take long to find the overall look I wanted, but I couldn't quite get the shape right of Andrew with his can of beer on the right. I was trying to get him to be looking off to one side and taking a swig, but the angles of his arm just weren't giving me the lines I wanted.

Suddenly as I counted them into a shot, Andrew shot his arm out, pointing his finger directly at the camera, can still in hand. A moment of inspiration that completely made the photo. 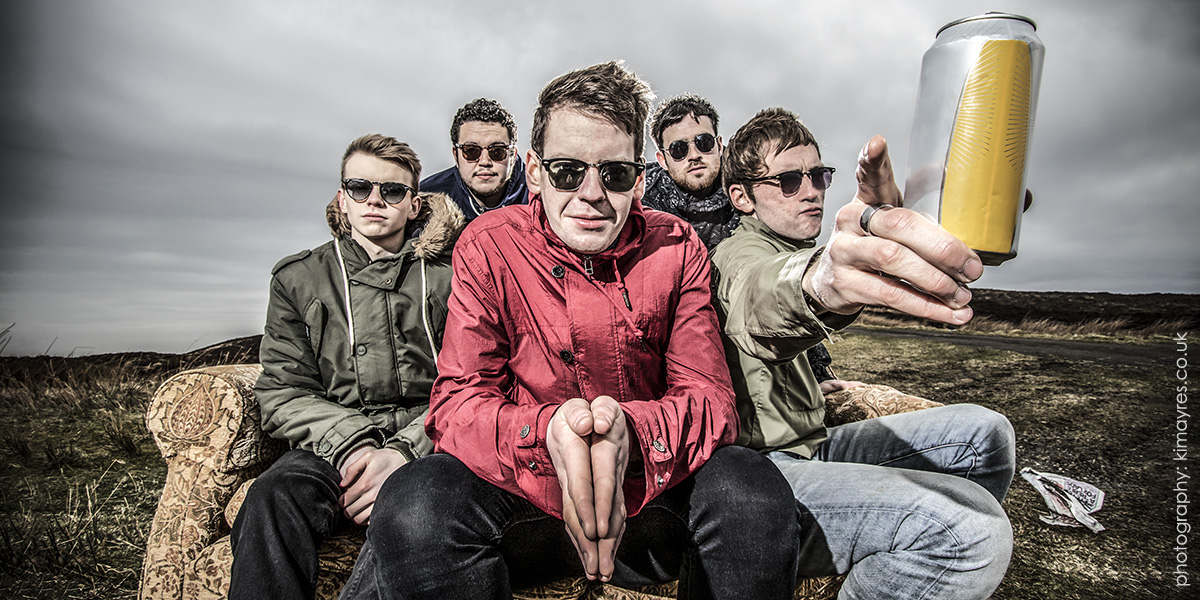 A few days before the shoot I felt it had the potential to have a good behind-the-scenes video, so I put out a call on Facebook to see if anyone wanted to come along, experience what it's like on a photo shoot, and do a bit of videoing. I had a few responses, but went with Brodie Donohoe – a young photographer who had previously come on a workshop I'd run a few years back.

With Brodie's footage and Kasama's track, Holding Up The Sun, I was able to knock together this short (about 90 seconds) video which gives quite a good sense of the photo session.

If this is something you are interested in, please head over to
https://www.facebook.com/groups/240842990388815/
and tune in on Tuesday evenings.

You can find recorded episodes of "Understanding Photography with Kim Ayres" on his YouTube channel - youtube.com/kimayres

You can find Kim on other social media outlets here:

It isn't easy to shoot in the wind. Great job!

Haha, you're right there! Thanks :)

Great execution! Will have to check this band out

Great work, have just checked them out on yt .... excellent sound - look forward to hearing / seeing more from them in the future.

Fabulous work :) don't know this band will have to look them up

There should have been a BTS video of the shoot, but it seems to have got lost in the publication - you can ding it here: https://www.youtube.com/watch?v=rEDyWWjWv7k :)

Should there be a link to the video somewhere?

Thanks - I did put it into the original post, but it looks like it got lost somewhere on the way to publication! :)

Tips on being a millinery model

PurplePort community, thank you for sticking with us through these tough times