Artists at 'The Nail Factory' in Scotland, by Photographer Kim Ayres

"I lit the woodburner to warm the place up," said Peter as we headed up to the Nail Factory.

He opened the door and smoke began pouring out. I couldn't see the back wall for it. "Aw, not again..." he muttered, disappearing into the thick cloud to open all the windows.

The Nail Factory in Dalbeattie, SW Scotland, is a very small building that has been turned into a gallery and art space. The intimacy of the place, the pleasant surrounds and the warmth and friendliness of owners Rupinder and Peter, make it a favourite venue for many local, and even not so local, artists.

It was the last day of November: with the closing of the exhibition season, and several of the artists arriving to collect their work, Rupinder was putting on a spread of food, turning it into a social gathering.

Wanting to make the most of a rare moment when so many artists would be in the one place at the same time, Rupinder and I had met up the previous month to discuss how we might create a photo to reflect that sense of artistic camaraderie.

Bouncing ideas about, we settled on the notion of having them gathered around a table, with some art and tools of the trade, in conversation with each other, perhaps with some light food – fruit, bread and cheese: hinting at a feel of a Dutch "Old Master" painting.

Key to this was going to be getting the light right.

Looking at the classic paintings of Rembrandt, Vermeer and Hals, I realised most of them tended to be lit by single window and/or a central candle. The challenge would be how I could replicate something similar in a small space with white walls (that would reflect the light and make shadows more difficult to create), on a winter's evening when it would be dark outside.

I set up an octagonal softbox above and to one side, which gave me a soft overall light, as though coming from a skylight window. A grid on the front prevented too much light spilling onto the upper parts of the walls, but a few places at the table were still too much in shadow. I set up another, smaller softbox just to my right, with a lower light setting, which brought just enough extra light onto the scene without interfering with the shadows I wanted.

Finally, I placed another off-camera flash with an orange gel, just behind the fruit bowl, under the candlestick, to give the look of candlelight illumination on the faces.

Here's an early test shot, before we moved the large softbox further back so as to be out of the photo, and changed the picture on the back wall on the right, which was catching a reflection of the 2nd softbox. 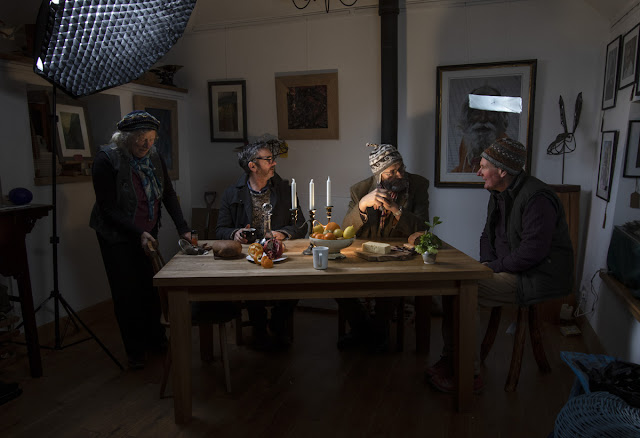 The lighting set up

In a lovely bit of serendipity, I happened to know all the artists who turned up for the shoot – in fact a couple of them I had photographed before.

On one level it was a little intimidating trying to be creative in front of a group of creatives, but this was counteracted by the fact they were all really warm and friendly, and happy to get into the spirit of things.

When I say warm, I am talking emotionally. Physically, we were all wrapped up in several layers because opening the windows earlier to clear the smoke, had also dispersed any remaining heat: it was only 4 degrees Celsius outside. 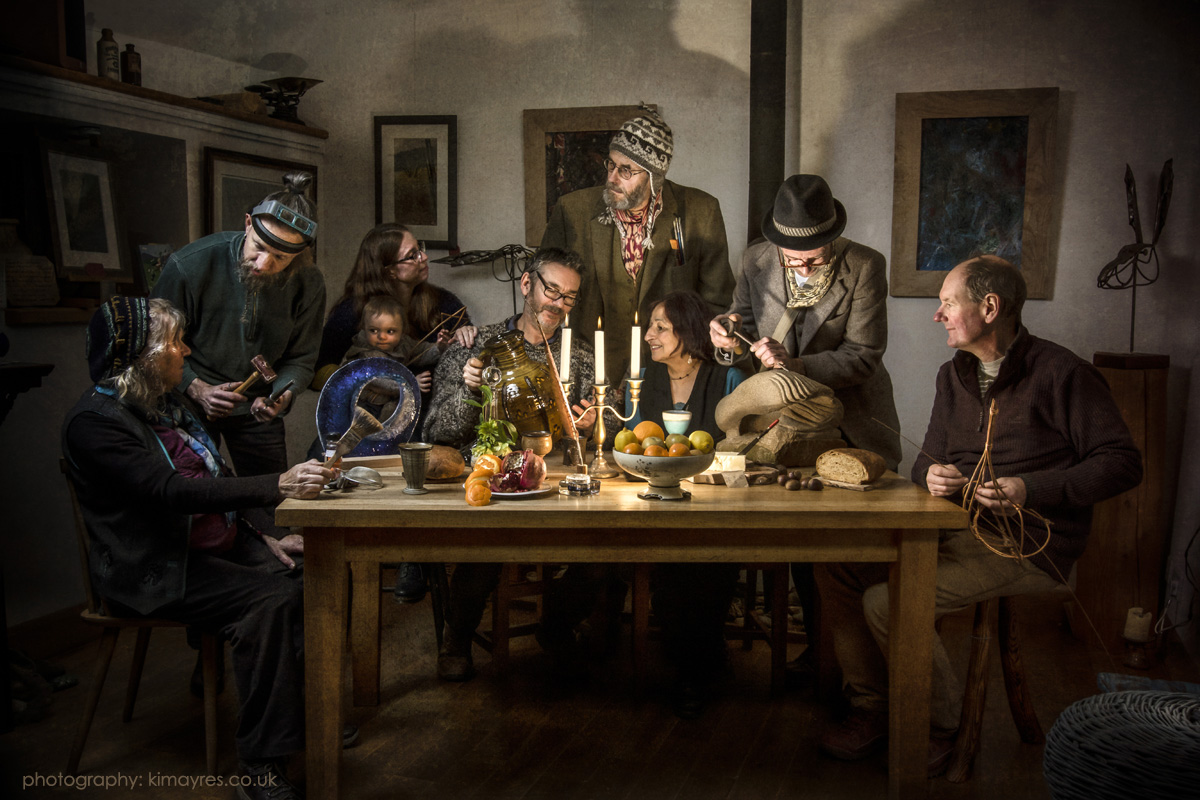 Rupinder did a wonderful job dressing the table, which has several details I love. The open pomegranate and peel coming off the orange were ideas we lifted from a medieval shoot I did the previous year; the pheasant-feather quill in a glass inkpot represent the fact a writer's group often use the space; and just next to the cheese and chestnuts is a small note which says, "may contain nuts".

If you would like to know more about the artists involved, left to right we have:

Caro Barlow who works with glass

Rupinder Dulay and Peter Dowden of The Nail Factory

When the shoot was over and I was packing away, the table was carried back into Rupinder's kitchen and an amazing spread of food was laid out for us to tuck in to.

One of the things I love about working in this corner of Scotland is it's not uncommon to be fed, watered and treated like one of the family when I'm out on a shoot.

It's never taken for granted, and it's always appreciated.

If this is something you are interested in, please head over to
https://www.facebook.com/groups/240842990388815/
and tune in on Tuesday evenings.

Love groups photography which looks like a story! Great project 👍, thanks for sharing. Also, that baby's look is soooo cute, I think he stole the show :-)

What a delightful project! As a painter who also takes photographs, the business of light is seminal to my work, and the dissection of your technique is most educational. Thank you for sharing it.

Many thanks for your kind words, JXC. My father is an artist (traditional landscapes), and so is my wife (abstract expressionism), so unsurprisingly perhaps, painting is a big influence on my work. :)

Beautiful work! Thank you for this blog :)

awesome, top marks from me.

Why. The original paintings are enough.

As it's a group portrait of artists and craftsmen, I feel it's a rather complimentary choice for the occasion, also does an understanding of light and composition get old? :)

WOW WOW!! Dont you just clever people, who have a vision and can turn a photograph into an oil painting!!! the effect is stunning

Super image and very interesting story behind it.

A truly inspirational shot. Love the lighting and the overall concept. Stunning!

Well done Kim and everyone involved in making this fantastic! Beautiful image! Stunning photography and concept!

Love this blog post Kim, can't wait to see more from you!

Perfect, full of character and emotion. I am really impressed by your work and especially the behind the scenes videos that you have put on your website. Need to now look at your FB account. Please keep up the great work

Many thanks for your kind words, Deryk :)

So many gems in our wee corner of Scotland

I love the fact this area of Scotland is full of artists, musicians, writers and creatives of all kinds :)

Tips on being a millinery model

PurplePort community, thank you for sticking with us through these tough times